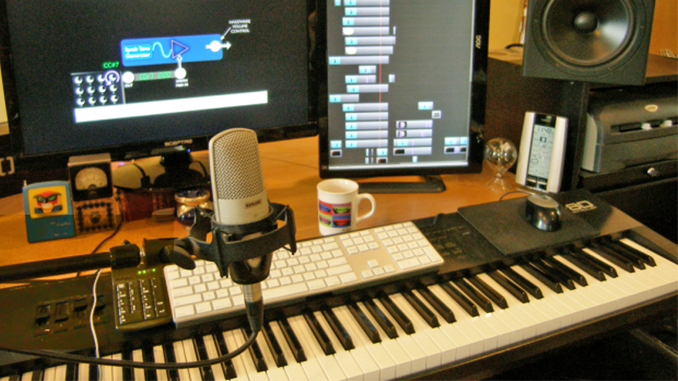 When I found out that all the MacProVideo.com trainers were using ScreenFlow for their in-depth training videos, I thought it might make an interesting story for the blog. I got into contact with one of the trainers, Peter Schwartz, who, serendipitously, I recognized as PSchwartz through his many helpful comments on the ScreenFlow forum! It’s great to see this community in action!

I had the fortunate experience to interview Peter about his process and his ScreenFlow-ing experience. He’s got some great insights, and tips, so read on…

What do you do for MacProVideo.com, and how did you get involved with this?

Here’s the backwards progression… My real job is that of film composer, orchestrator, and keyboardist, and I compose and record music using software called Logic. Through one of the online Logic forums I met Steve Horelick, publisher for MacProVideo. We got to know each other both online and offline, and at one point he approached me with the idea of doing a tutorial video. After mulling over several concepts we settled on my doing a tutorial on MIDI, which for those who may not know, is a system that allows all manner of digital musical instruments to be connected to each other or to a computer. Anyway, four months later, MIDI 101: MID Demystified, is now on the virtual store shelves at MacProVideo!

How do you go about creating a tutorial video? What’s your process or workflow?

I started by creating a curriculum in which the progression of the various topics would, hopefully, lead towards a natural understanding of the subject by the end of the course. It was to be my master plan, my road map. I started creating the videos in order of the topics listed in the curriculum, and things were going according to plan until I got to about 75% of the way through production. That’s when I got the nagging feeling that I was leaving a key aspect of how MIDI works to be divined from information I previously covered, as opposed to stating this information outright in another video episode. I really struggled with whether to make that episode or not, even though my gut instinct told me to do it. On one hand I didn’t want to potentially insult the serious student of MIDI by stating what might be obvious and repeating information, but at the same time I didn’t want to leave it to chance that someone taking a more casual approach to learning about MIDI would miss out on those concepts. In the end, I went with my instincts, and that episode turned out to be one of my favorites, not only in terms of content and delivery, but also in terms of the imagery I created for it.

I think this points out one of the challenges, for me, anyway, of being very close to a subject and then over the entire course of production, trying to maintain a perspective that isn’t clouded by 30 years of experience and familiarity with the topic. Anyway, the curriculum I made at the beginning, with one or two diversions, proved to be the most important part of the production process.

As far as actually making the tutorial, the majority of it is animation, done right in ScreenFlow. There’s very little screen capture stuff. There’s a bit of live action footage which I shot with a Sony video camera, but for the most part my tutorial is animated using movement of still images, text items, and dingbats. Anyway, I’d start by writing a script. Then I’d create a blank ScreenFlow document by recording one or two seconds of whatever happened to appear on my screen and then delete that material. That gave me a completely empty project to which I’d start adding the still images I thought I’d be using. From there I’d recite the script in my head while placing images and text elements or dingbats on the timeline.

In your opinion, what are the most important elements of a tutorial video?

That’s a hard one to answer! OK… Every video has to tell a story that’s interesting on two levels: the spoken word and the visuals. One thing that I find distracting in some videos are the use of too many clichéd transition effects. Another would be finding a good balance between explaining things and showing things. In filmmaking, there’s a kind of rule: “show, don’t tell”. On the extreme side of “show” you can look at Stanley Kubrick’s 2001, or Vanilla Sky. On the extreme side of “tell” you have any episode of CSI. So I’d say that finding the balance between showing and telling is very important to making an effective video presentation. Now, that’s not to say that I’m any kind of expert, or even that I found the perfect balance in my own video, but those are two things that I had in mind during the course of production on my MIDI tutorial.

And I guess the last item on my list kind of ties in with my spiel on transitions, and that would be to show restraint with respect to fonts. Using too many fonts can make a presentation look comical. At the very least, constantly shifting font styles is going to detract from your message. In my view, a font establishes a feeling, tone, or style; and once that sensibility is established it should be maintained so that the font itself becomes transparent to the audience through repeated usage. Using other fonts should be used only to emphasize a particular point, but I’d still suggest keeping your “emphasis font” selection down to just one or two styles.

What do you find to be the most challenging aspect of creating your tutorials?

Finding my voice as a narrator was really difficult! Not only did I have to get used to hearing the sound of my voice, but there was also the matter of finding a voice over “personality”. I found that if I just read the script, it sounded totally flat and boring. And it’s not like I have a monotone voice, and it’s not like I lack enthusiasm for the subject, but I just felt like my voice over needed to have a different personality from my normal speaking voice. At the same time, I wanted to be able to talk in a natural, relaxed way and not put on an air about it all. So it took a while, but I found a way of modulating my voice and putting emphasis on words in a way that felt natural to do. And the proof of whether or not I was effective towards this standard would be to play back the video and distract myself by doing something else, like read the news online. If I didn’t get that “don’t talk, teach!” feeling from hearing the sound of my VO in the background, I’d go back and re-do some lines of script to improve the delivery.

I think with this tutorial under my belt I’ve found my VO voice, which my wife and friends tell me sounds very much like my normal conversation but in “teaching mode”!

What kind of equipment or set up do you have ?

I’m using a Mac PPC Quad 2.5, with dual 27″ monitors, one rotated 90º vertically. That’s my normal setup for writing music, where I’ll view the score in normal page orientation on the rotated monitor. But when it comes to SF work, many of my videos have dozens and dozens of layers, some upwards of 100 or more. Now, my delivery requirement was 1280×720, and viewing my videos at full size on a 1920×1080 monitor left very little screen real estate in which to view layers. So when the layer count would start to get really deep I’d move the SF window over to the rotated monitor, reduce the viewing size a bit, and get busy tweaking the elements on upwards of a few dozen layers at once.

What other programs do you use besides ScreenFlow to create your screencasts?

Image editing done on Adobe Photoshop Elements, Logic for recording VO and musical examples, and QuickTime Pro for proving the rendered videos. But I’m no graphics expert, so I farmed some of the image editing work to two different Photoshop professionals, and that made life a lot easier! I very much believe in division of labor, though of course that’s always tempered by having a budget for it! But that reality aside, the importance and merits of division of labor have been sort of swept under the rug under the guise of “hey, you have a computer, you can do it all yourself!” and that’s often proves to be a false economy. But I’ll stop there with my philosophizing! 🙂

As for microphones, I used a Shure KSM-27. I’ve had it for years as a general purpose mic, and it sounds great but isn’t the most flattering one for my voice. For my next project I’m going to get something else, probably an ElectroVoice RE20.

What advice would you give to someone just starting out creating tutorial videos?

Try and envision a visual style in your mind’s eye before just digging in and starting to create a tutorial. This means experimenting with the software to see if you can achieve what you want. And I guess the other advice would be as I said before, to show restraint with the use of transitions and fonts.

What’s the stupidest mistake you’ve made when creating a screencast?

Out of all the stupid mistakes you want me to just pick one? 🙂  Hmmm… OK, well, there was the time I hit “play” instead of “record” while reading through my script and lost a perfectly good 5 minute read that took me like 3 hours to redo with the same feeling. Oh, and then there was the time I didn’t bother to watch a video from top to bottom before committing to the several hours it took to render it. When I proofed the rendered QT movie I saw a really egregious spelling error and had to re-render the whole thing. Hours wasted because I didn’t spend 7 minutes proofing the production before rendering. Stuff like that.

What’s your favorite program for the Mac?

Ha! OK, aside from ScreenFlow? Apple Mail. Because it’s virtually flawless in its operation. Hey, what can I say, I’m pretty easy to please LOL!